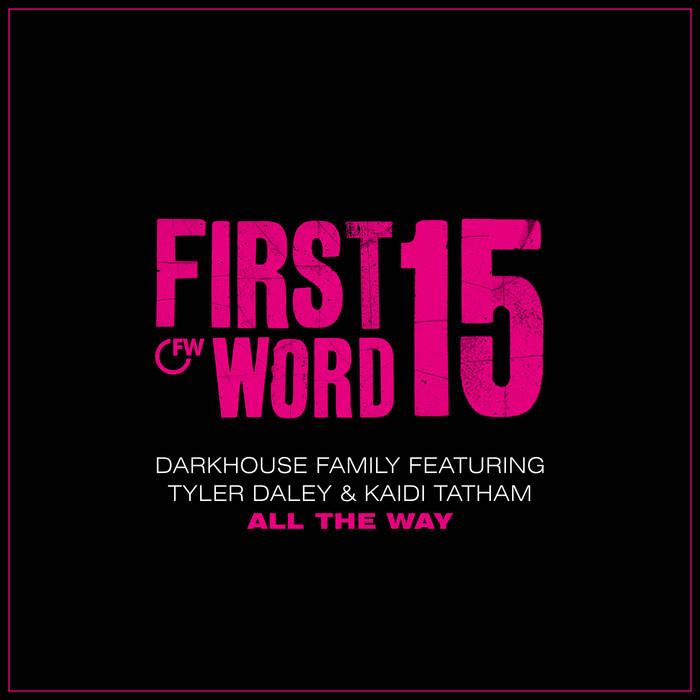 This year, First Word Records celebrates its fifteenth year in the game. The year commenced triumphantly with First Word being named "record label of the year" at Gilles Peterson's Worldwide Awards 2019. Over the past six months, we've seen new music from 14KT, Souleance, Myele Manzanza, Teotima, Don Leisure, Children of Zeus and a range of artists across Europe, on the 'Music! Musik! Musique!' compilation.

To commemorate the 15th anniversary, First Word has a series of releases in the works for the second half of the year which see collaborations by artists from the label's current roster. To kick off, we have this special double-AA sided 7" single featuring Darkhouse Family, Kaidi Tatham & Tyler Daley.

Darkhouse Family consists of two Cardiff beatmakers & musicians, Earl Jeffers - founder of Melange Records and producer of 'A Library Excursion' from 2018, and Don Leisure, who recently provided us with 'Halal Cool J', the beat-tape sequel to 2017's 'Shaboo'. Over the years they've had releases, solo & individually, on Fat City, Metalheadz & Earnest Endeavors to name a few, bridging the gaps between various strains of dance music, beats and hip hop, with the organics of jazz and funk. Recently making noise across the UK with their new live band, and production work for the likes of Kamaal Williams, this is their first new release since their highly-acclaimed 2017 debut album 'The Offering' & subsequent remix project which also featured DJ Spinna, and one Kaidi Tatham.

Kaidi Tatham is one of the most revered multi-instrumentalists in the game. His endless contributions have included Bugz In The Attic, Amy Winehouse, Slum Village, Mulatu Astatke, Soul II Soul, Moonchild, Leroy Burgess, Amp Fiddler and loads more. Dubbed by Benji B last year as "the UK's Herbie Hancock", his versatility as a musician is actually more akin to Prince. He can play most things, and play them well. Providing flute duties on this track, he also graces the flipside with a full "flutestrumental" version. Aside from numerous other projects, Kaidi released three EPs on First Word to date, 'Changing Times', 'Hard Times' and 'Serious Times', and an album last year, entitled 'It's A World Before You', which featured daddy of 2000 Black, Dego, son of Jazzy Jeff, Uhmeer and Children of Zeus, Konny Kon & Tyler Daley.

Tyler Daley hails from Manchester, alongside son of Zeus, MC / DJ / beatmaker, Konny Kon. Somewhat of a veteran in the game, Tyler is currently one of the most-recognisable talents in the British soul scene, also lending his talents to dance music royalty along the way, including the likes of Goldie, Zed Bias, DJ Marky & Lenzman. With Children of Zeus, the duo have had a whirlwind 12 months since the release of their debut album 'Travel Light', performing shows across the globe & gaining new fans daily. The record was named "album of the year" by Complex magazine and BBC 6 Music's Huey Morgan, amongst a number of other notable tastemakers & selectors. Hot on the heels of the 'Excess Baggage' EP, Tyler laces this one with his inimitable brand of bars and soul.

A veritable super-group amongst the First Word stable, this low-slung slinky joint sees the guys work up a unique blend of jazz, soul, beats and hip hop - guaranteed to go 'All The Way'…

Featured sounds from Fly Lo and Ahmed Idris, plus Mother Nature hops on to drop off new project